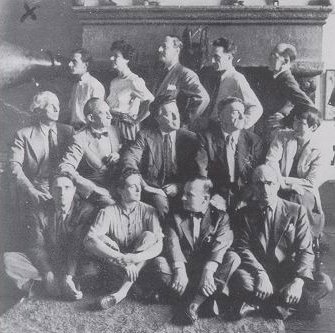 STANLEY WILLIAM HAYTER AND THE SURREALISTS
by David Gascogne

It was my good fortune to be introduced to Bill Hayter when I'd just turned 17, during my first visit to Paris in the autumn of 1933. Our first meeting occured at a party to which I had been taken by Georges Reavey, poet and translator, a member of that illustrious Cambridge generation that included William Empson, Humphrey Jennings and Kathleen Raine, as well as their friend Julian Trevelyan, who at that time was working in Paris and studying with Hayter at Atelier 17, so-named after the number of the studio-apartment in the rue Campagne Première where it was founded in 1927. The party took place at 11 rue Daguerre, near the Place Denfert Rochereau, only a short walk from Hayter's Atelier.

During my first stay in Paris the only representative of the Surrealist movement I actually succeeded in meeting was Max Ernst, whose rue des Plantes atelier I visited and came away with Oiseau en Forêt gouache, bought for a few hundred francs. I also went to the Librairie Surréaliste of José Corti in the rue Clichy, and later returned to England with not only Max Ernst's La femme 100 têtes, but also with several collections of poetry, particularly by Breton and Eluard, which I soon began trying to translate. Before I left Paris, Julian Trevelyan had taken me to that year's Salon des Surindépendants at the Porte de Versailles, where the work of most of Hayter's associates and pupils, as well as of many fringe surrealists, was to be seen.

Later while I was writing a book on the Surrealist movement, which though established in France in 1924, remained virtually unknown in this country. Arriving in Paris in June 1935 to undertake research and collect material for what later became A Short Survey of Surrealism, I went first to call on Paul Eluard in his rue Legendre apartment, as I had already been in correspondence with him about publishing translations of certain poems of him in magazines. He read aloud to me from pre-surrealist French poets I'd not then heard of, and gave me copies of his very rare Dada-period tracts Proverbe. I had also been in correspondence with Breton, informing him of my intention to write the Survey. But what I had read and hear about him made me intimidated by the idea of actually meeting him, as I confided to Bill Hayter, whom I had contacted again soon after settling into the Hotel de l'Odéon. With typical kindness, S.W.H. immediatly offered to make an appointment and accompany me to the surrealist leader's abode in the rue Fontaine, just round the corner from the Place Blanche, at the foot of the Butte de Montmartre. As we entered the courtyard of no.42 one fine summer morning, the concierge's dog began barking furiously. My nervousness increased by this cacophony, I glanced up at the little iron balcony extruding from the top floor above the entrance to the stairway leading to Breton's apartment. There unmistakably stood the Master, peering down seriously at our arrival heralded by an angry dog as though he had been expecting us at that moment. Breton's exquisite customary politesse soon put me comparatively at ease and the interview proceeded satisfactorily enough. I was interrogated as to the correctness and probity of my intentions, and in token of Breton's provisional approval, I was invited to attend the daily 6 pm meetings of the group at the Café de la Place Blanche whenever I should feel so inclined.

At this time I was but ill equipped to calculate the true nature of the relation between Hayter and Breton. In 1935 it was manifestly one of mutual esteem, but the warmth characteristic of Hayter's friendship with Paul Eluard, which was later to result in the series of engravings introduced by Eluard's poem Proie Facile (1938), was not in evidence where Breton was concerned. If any work by Hayter ever formed part of Breton's vast and heteroclite private collection, it was never on display, and there is no reference to Hayter's name in the 510 pp. catalogue to the Breton exhibition at the Centre Pompidou in 1991. I remained for long quite unaware of the increasing coolness of the relation between Breton and Eluard; their thriumphant collaboration in the texts of L'Immaculée Conception was only five years old, but their alliance was already seriously deteriorating. Eluard lived within easy walking distance of the Place Blanche, but on only one occasion did I see him make an appearance at the café sessions presided by Breton there every evening, and that was when the entire group was shaken by that day's news of the suicide of René Crevel. As far as I know, Hayter had never been in the habit of attending the quotidian meetings in Montmartre.

Following the shake-up of surrealist alliances in general consequent on Breton's publication in 1930 of his Second Manifeste du Surréalisme, André Masson and his close friend Georges Bataille, -(as well as Delteil, Limbour, Artaud and Vitrac)- had been rigorously excluded from the movement and its activities. I had not failed to observe that probably the closest affinity between Hayter's work and that of the original surrealists was that to be discerned between Hayter and André Masson. Like Hayter, Masson's outstanding trait was the formidable dynamic vitality of his calligraphic line, evident in the automatic drawings reproduced in early numbers of La Révolution Surréaliste, and typically in the later series of Massacre to be found in Minotaure. He may be said to have had a lifelong obsession with what Yeats referred to as "the uncontrollable mystery on the bestial floor"; and a similar obsession is not absent from a number of Hayter's works of various periods, excepting perhaps those of his final years. According to the surrealist painter and critic Edouard Jaguer, Hayter's "superb Paysage Anthropophage of 1937 remains one of the most forceful canvases of the pre-war period of surrealism"; though he regards S.W.H.'s later abstraction as having lost something of its original organic character in confining itself to a less aggressive geometry.

The works most typical of Hayter's maturity may well be categorized as resulting from aims common with those of the association of painters briefly known as Abstraction-Création (Paris 1931-36). This international constellation shared a focus centred on the area where subliminally suggestive representational forms merge with non-specifiable forms created by chance and determined by gestural rhythm: Masson and Miro are the best-known representatives of this tendency; Wolfgang Paalen and Ashile Gorky are both strongly affiliated with it, as in their differing ways are Kurt Seligmann and Gérard Vulliamy, both of Swiss origin, like Klee. Most of them at one time worked with and were influenced by Atelier 17. Klee's famous "going for a walk with a line" method became with Hayter and the other artists just mentioned "going exploring and hunting" by linear and spattering means. The whole of this aspect of XXth century art is closely related to what Fanchon Fröhlich refers to as décalcomanie.

In her discussion of Hayter's theories and experiments, F.F. alludes to his special love of music and the analogies he drew, in working with his students, with counterpoint and melody. This seems to do much to explain Breton's relative lack of enthusiasm for Hayter's contribution to international surrealism, as he had no ear for music whatever, and enjoined his followers to "let the orchestra sink into the occidental marshes".

At the time when Roland Penrose, Herbert Read, E.L.T. Mesens and myself were working with a committee to organize what became the First International Exhibition of Surrealism at the New Burlington Galleries in London during the summer of 1936, Bill Hayter became a most precious liaison officer between London and Paris in assisting the preparations. Two paintings and a dozen etchings by Hayter were among the many hundreds of works to be seen at the time of this sensational (for the British capital) and lastingly influential event.

This seems to be the place to quote a paragraph on Hayter by Michel Rémy, whose knowledge of the entire history of British surrealism is unparalleled among his countrymen:
"Although Hayter settled in Paris in 1929 and only lived in England over the war years, the part he played in the transmission of surrealism into England is enormous; his Atelier 17 in Paris was the rallying point and meeting place for all English artists arriving from England as well as for most French surrealists. He is undeniably the painter of automatism as developed through the techniques of engraving. For him the line is a pure creation of the hand dictated by the thought, the engraving plate becoming thus the scene where physical, chemical and psychological phenomena dramatically happen; he recreates the pure movement which precipitates the mind and reality against each other at the very moment of perception. 'All our perception reaches us in terms of rhythm; the slow turn of seasons, the beat of the heart, the microcurrents in the wind, vibrations of waves of sound and light', he once declared, inventing thus an alchemical language along the life lines of the subconscious." 13

Since I was publishing a poem of mine called Variations on a Phrase, inspired by Rimbaud; and I was delighted to find that Bill Hayter needed little persuasion to produce a litograph suitable for this purpose. It consists of vigourous, complex image of HephaÏstos and his net, made with a single blue line against a yellow background; printed on a sheet some 22 by 14 ins. alongside the text, it appeared the following year in an edition limited to 400 copies. Like Masson and Bataille, Hayter's imagination was unusually well stocked with mythological figures of every kind; it was fortunate for me that HephaÏstos, as he later told me, made a special appeal to him.

On May 5th 1988, Bill's son Augy telephoned me from Paris to tell me of Hayter's death the day before.
I wrote this as his obituary for The Independent:
"All those to whom he imparted his greatly varied range of etching and engraving techniques came before long to regard Bill Hayter as a faithful friend, such was the exceptional warmth of his personality, his humour, tolerance and informality, counter-balancing the strictures dictated by his professionalism."
After then going on to enumerate Ernst, Miro and Tanguy as the best known of his early pupils,
"He was closest to André Masson in the gestural virtuosity of his alternately fluid and jagged line expressive of the impetuous dynamism animating his work as teacher, inventor and craftsman."

When the last time I was in Paris I went to visit him in the rue Cassini as usual, Bill Hayter had just returned from a game of tennis, which he still played regularly, though by then turned 80. I am told that the night before he died he went out to dine with friends, no doubt as ever the most endearing and exuberant of guests. It was difficult to think of him as an old master, but the master of 20th century engraving he has undoubtedly been for the last fifty years.