Chain curves are compared with parabolas, ellipses and more concretely with cloud formations.
'Catenary curves (Latin: catena=chain) are illustrated in the workshop with a number of suspended chains. The construction is shown as two symmetrical logarithmic curves (similar to perspective) and understood as the progressive change between the lateral tension against two points of attachment with the vertical pull of the weight of the chain. Using a mirror it can be shown that all the asymmetric deformations of these chain curves correspond to perspective views of the symmetric chain. The importance of the curve is demonstrated as determinant of all suspended compositions or structures. Thus in a cloud landscape from an airline poster in the workshop we showed that all of the masses of cloud fell precisely on a series of catenary curves.---/'

Fig.154. Clouds suspended in a catenary curve
The physical, not the cosmic, embodiments of catenary curves are considered - in suspended chains and, more lightly, in clouds - both illustrating the same structure where the force of gravity enters. 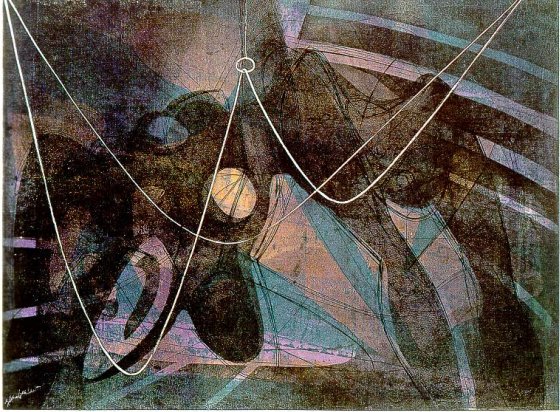 '---/ This curve is compared with a parabola of almost the same length and curvature and again a part of an ellipse so that the differences of curvature, as rigidity or flexibility can be appreciated.'

Fig.156. Superimposition of a catenary curve showing the force of gravity on a purely geometric ellipse

'---/ It is pointed out that the ability to distinguish such forms one from another is an essential part of the equipment of an artist. Although we might consider this faculty to be innate it is obviously susceptible of cultivation or of neglect resulting in atrophy.'