Here it has been found that the introduction to geometry that many beginners have suffered was inadequate and confusing, resulting in a strong resentment against such formation. To get over this a certain formulation of elementary curves has been applied to avoid the dialect of mathematics. Thus a point moving around a center forms a circle;---/'

Fig.138. A point attached by a string to a centre around which it moves generates a circle.

'---/ the centre being extended to two points the moving point will then trace an ellipse. This can be demonstrated with a loop of string around two points.---/'

Fig.139. If this centre is broadened to include two displaced points and a string is attached to both so when one side is shorter then the other is longer, then the line drawn will form an ellipse.

'---/ If now we consider one of these points to be pushed out to infinity the ellipse opens and if we still try to keep the distance between the moving point, the centre and a line equal, the curve becomes a parabola.---/'

Fig.140. The one point is kept steady however the second point is gradually moving out toward infinity thus producing an unending process leading to a parabola. A real parabola can by definition never be finished yet its form enters importantly both in mathematics, physics and in drawing. Here the parabola is presented with arrows indicating its true direction toward unattainable infinity.

'---/ A surface called paraboloid obtained by revolving this curve can be shown to produce a mirror which will project a parallel beam from a point light source.---/'

Fig. 141. When this parabola is revolved in the third dimension it becomes what is known as a paraboloid which has the property of reflecting a beam of light from a point source. This is most concretely exemplified in the shape of an old style auto's head-light.

'---/ A spiral may be understood very simply as a moving point that goes round; so we construct a number of concentric circles of equal intervals. Furthermore we see that the eye will follow it inward or outward (Paul Klee 'life and death spirals') so we draw a number of radii to these circles. We have now a matrix permitting us to draw any number of different spirals by stepping from radius to circle in the proportions of 1:1, 1:X, X:X etc.---/'
The construction of spirals from concentric circles and the radii to these circles uses an intuitive leap which ensures their continuity.

Fig.142. The spiral in a ratio 1:1 continuously tending toward the outside follows a clockwise motion toward life

Fig.143. The spiral in a ratio 1:1 continuously tending toward the inside the inside follows a counter-clockwise
motion in the direction of death.

Fig.144. The spiral in the ratio of 1:2 continously tending toward the outside follows a clockwise motion toward life

Fig.145. The spiral in the ratio of 1:2 continuously tending toward  the inside follows a  counter-clockwise direction toward death.

Paul Klee in the 'Pedagogical Sketch Book' : in this figure, Paul Klee has extended the ratio between the rotations and their size so that one sees the spiral actually opening and closing in a dynamic motion toward expansion or toward contraction. Directions shown by arrows either follow a clockwise motion toward expansion symbolically life - or an anti-clockwise motion toward contraction, symbolically death.
"Changing the length of the radius combined with peripheral motion transforms the circle into the spiral. Lengthening the radius creates a vibrant spiral. Shortening the radius narrows the curve more and more till the lovely spectacle dies suddenly in the static centre. Motion here is no longer finite, so that the question of direction regains new importance. This direction determines either a gradual liberation from the centre through freer and freer motions, or an increasing dependence on an eventually destructive centre."

If one considers as separate the movement starting from the centre and the movement starting from the peripheries, one has both contraction and expansion with clockwise and counter-clockwise motions. This provides both a geometrical and a symbolic distinction. Life expands from the centre to include more and more of the world or contracts into itself yielding limitations whereas death can either contract toward the centre yielding suffocation and an absence of space itself or expand into illumination.

Fig.147. Spiral of life in contraction

Fig.148. Spiral of life in expansion

Fig.149. Spiral of death in contraction

Fig.150. Spiral of death in expansion

In contrast with the infinities of the parabola, cycloids are produced in a finite jumping way.
'---/ Cycloids can be understood as the curve produced by rolling a circle with a point marked on it, above or below the straight line. A circular protractor or cut-out disc can be used for this.---/'

Fig.151. Cycloid curves on both sides of parallel horizontal lines.

'---/ The same operation on a curve will produce a helix. The latter curve can be shown to illustrate the function of time in a time/space continuum. Thus if one describes a circle in the air returning to the point of departure, this is impossible in time/space as the point of departure has moved into the past while the circle was being traced. Thus the closed, static, symmetrical form (circle) was in reality in time/space an open, dynamic, asymmetrical form as a screw thread, bed spring or helix.---/'

If time is introduced, that brings in another dimension which in daily life, is present in anything we do. This is quite different from the other, spatial dimensions considered earlier. "You can never step in the same river twice." as Empedocles said, since the river has changed, you have changed and even the surroundings have gradually changed. Everything ages at different rates so even the simplest circle is an ultimate abstraction out of time. In time it would be a helix. In this context rotation could only be realized in an absence of time - in a no-time which factually is unrealizable.

Fig.152. Circle projected in time-like dimension creates an helix.
This is quite different from considering a circle as projected spatially into the third dimension where it would become a sphere. There is a radical difference in Relativity between space-like and time-like dimensions which is suggested here.

'---/ In this context rotation could only be realized in the absence of a time factor, that is in a no-time which is factually unrealizable. The observation of these forms in a mirror will show a reversal of direction, inward to outward and upward to downward in all cases.'

Fig.153. Spiral executed in a downward diminishing direction. The mirror image seems to show an upward direction.
This is a four-dimensional image, including one definitely time-like. This inversion of direction can be observed very concretely as one passes from the northern hemisphere to the southern in the spiral emptying of water: in the north going in the counter-clockwise direction, in the south clockwise. 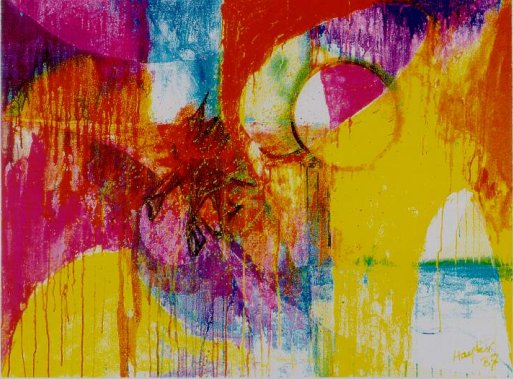 .XX. SEPTEMBER, S. W. Hayter
Oil on canvas, Catalogue of Jean-Claude Riedel Gallery, Paris,1988
This is one example of all of these curves playing together. Catenary curves, ellipses, parabolas, circles on vertical and nearly obliterated horizontal lines play together, disappearing and reappearing, overlapping. Different forms join to penetrate the picture. A leaf emerges from the right. The painting flows with autumn sunlight suggested by a circle above a scarcely indicated lake.