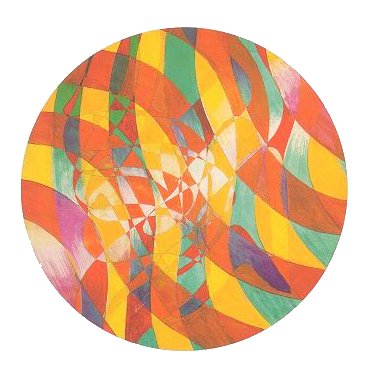 This book involves the reader as active participant, being a gentle but disturbing guide to a number of linked methods of research from which others will emerge depending on who the reader is, what he can see, how he moves and on his patience in perceiving what isn't at first sight evident.

When exploring a two-dimensional line it can be extended into the third and even the fourth dimension in interpenetrating layers, oscillating ambiguously and one can realize, in the pit of one's churned stomach or migraine-threatened eyes, how computer generated tossing between convexity and concavity causes deep disturbances. One can construct, without the use of geometry, surfaces in space in a playful way. One learns how to invert space, causing the ground to arise as projecting while the figure is floating above the interior. This is a Gestalt transformation, employing the minimum possible alterations of the figure. One can discover how to use the eyes which normally only partially perceive the enormous amount of information blazing at one when convexity suddenly changes to deep concavity, or when after-images emerge slowly, or when the dimensions arise from what seems to be a flat and confusing surface. One learns how to investigate the unconscious through free but rigorous drawings and to establish a dialogue between the unconscious and the conscious faculty of choice in exploring the unknown; the unconscious drawing can be thereafter treated fantastically in a figurative way or abstractly. One explores games - for one person which, immobilizing the conscious attention, let the unconscious loose to find some spontaneous regularities - or games for several persons going from arbitrary games played by the Surrealists to precise and unexpected coherence. One perceives how grasping with the hand appears to create mysterious organic but unrecognized forms. One sees how colours can arise unexpectedly from the interpenetration of two lines of different hue, how after-images begin to play with each other and how the surface vibrates. Here, pulling together the section on lines and the section on colours, enables one to see colours projecting and retreating in a continuous oscillation.

This book is only a selection of the many possibilities suggested here and from which the reader can expand in determined but infinite directions. One gets space into the mind, into the perception and into the moving hand, in many ambiguous ways. Paul Klee expressed this poetically in 'Théorie de l'Art Moderne': "What artist would not like to live where the central organ of all space-motion, call it brain or heart of creation as you will, activates all functions? In the womb of nature, in the primal ground of creation where the secret keys of all things lie hidden." 12. In this book, we have the illustrations suggesting how with Hayter we have used these simple examples, perhaps combining several, providing artists and readers alike with the realization of their powerful mind - and eye - and hand heightening researches.

As Hayter, more precisely but equally challengingly has indicated: we want to see the almost impossible, to see something we have never seen before arising out of these methods, and it sometimes does, then we will be content.