A fragment of such a conversation by S.W. Hayter, links melody with chords to illuminate and differentiate these from colour relations: "If we could see colours in the same complex way that we hear sounds, the colours would interpenetrate"...as sounds normally do.
This might be another parallel to the way he used counterpoint which suggests the overall relevance of a group of lines which are not dictated by one but motivated by each other, to illuminate visual processes - another example of the way he uses music to cast light on painting. What might be the musical analogy between sounds and colours, bringing them together, assimilating them in one complex metaphor? - For instance, drawn coloured lines as the visual equivalent of melodic lines, intersect in one chord. One can hear this in depth in the chords and in succession in melodies or one can disentangle the individual melodies making up the chords. Perhaps one can not hear each note in the chord but one can perceive that something is missing when one omits one of these constituent melodies. Thus the interpenetration of these coloured visual lines in combinations, forms what might be the analogy of melody and chord in music.

Now is there such a complexity for the eye as for the ear? It is logically impossible to see more than one colour in one place. Even when a generalized vague colour arose at a distance as in Pointillist painting, when the surface itself is minute, from close-up, one perceives the distinct opaque precise bright colour. But this holds only for opaque colours: when the paint is transparent, one can see through it other colours lying beneath it or floating over it. The colour which belong to long lines are separated, so one can see their individual constituents. Both the individual colours emerging in the lines and the complex superimposed colours obtained from their intersections are visible. These superimposed colours are always unexpected, sometimes dark and unnamable, generating new sensations. In other words, it is this situation of transparent colours running in precisely determined lines and intermingling at certain points to create arising colours which is present here.

Let us take a concrete example from music: a fragment of Telemann in which each of the horizontal lines can be heard as melody in time but which also join in the vertically arranged chords. It is this double life of music, both as melodies and as chords which one hears. If the eyes were trained to the same degree as the ears, one might actually see - disentangling the component colours from one complex colour and following them on their horizontal journey.

Fig.190. fragment of Minuet by Telemann with the chords held together as  distinguished 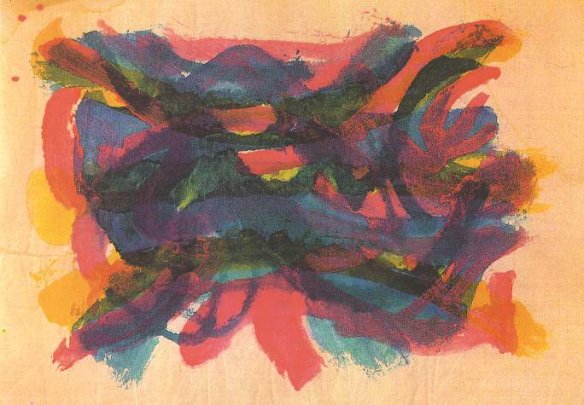 Several painters including Paul Klee and Kandinsky made paintings inspired by music but this corresponded more to the mood of music rather than to its internal structure. Some composers, Scribian and Schaeffer, choregraphed visual light projections to be seen while their music was heard but this corresponded externally to felt music rather than to the melodies and chords of the actual score.
In these three paintings below the horizontal lines - as the melodic lines - coinciding at certain points with other melodic lines create complex superimposed colours corresponding in music to chords. So painting can in this sense actually approach the condition of music. 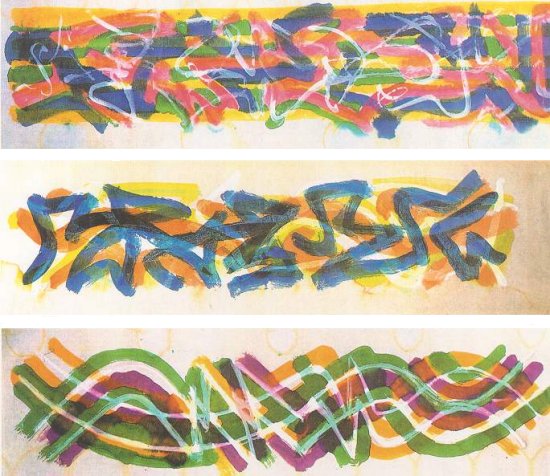