'On very large sheets of paper pinned up on a wall progressive drawings are executed by a number of different artists continuing the lines established as in the previous experiment. Here, as the previous image is visible to the one who continued the experiment, anything may happen as free association of image, contradiction, inversion of structure, progressive deformation etc.---/'

Fig.177. Collective drawing executed by Sylvie Le Seac'h and Fanchon Fröhlich. Progress of lines alternately drawn in four stages. The severely limiting condition of ignorance is suspended so each one can see what is done before but starting with her own section of paper one can trespass deliberately on the other's section interpenetrating the other drawings.

The other possibility, not suggested in the listed experiments, is that of drawing simultaneously, one reacting to the other's movements as in a non-competitive game of chess wherein each is supremely sensitive to the whole configuration and reacts to the whole introducing the elements of unexpected reaction. Of course a great genius in chess play would introduce the unpredictable. Is the reaction arbitrary or determined by deep unconscious? That question merges with the doubt about free will and requires trust in the overall process becoming coherent through collective operation.
Collective drawing: a number of artists all drawing simultaneously and alternately on the same sheet of paper, being affected by what is already there and going on to influence those who will come after has been little practised. It could be seen as an active dialogue among artists in a heightened relation one with the other.Drawing in this collective way, Sylvie Le Seac'h and Fanchon Fröhlich found that there was much more coherence if the whole picture was constantly visible; this new way of painting was called "COLLECTIVE PHENOMENA": a group of international artists painting together influenced both by the collective unconscious and conscious decisions. 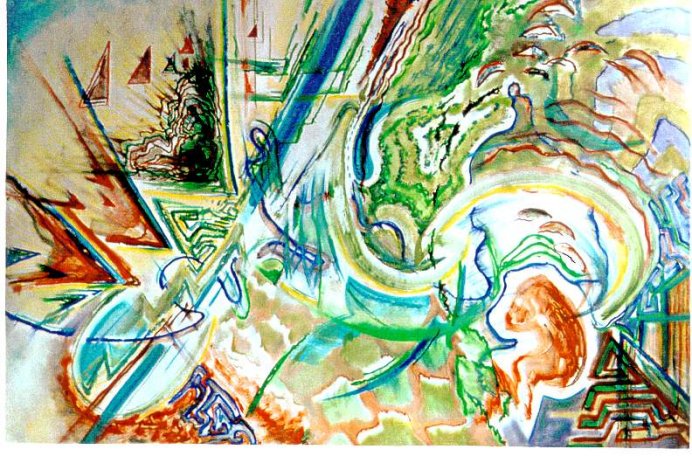 '10B.---/ The preparation of the sheet with successive panels covered with vertical lines, with diagonals to horizontals to convex and concave curves before the collective drawing is undertaken is also of interest.'

Fig.179. Collective drawing executed by Sylvie Le Seac'h and Fanchon Fröhlich, on the same sheet of paper without any designated section and superimposed on bow curves.